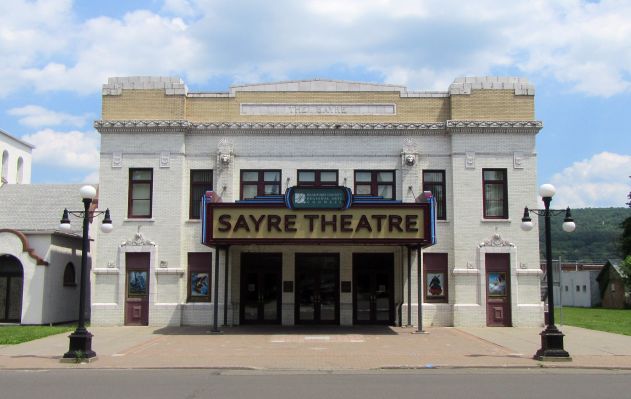 The Valley and surrounding communities have given enormous contributions of time, talent, and treasure to Bradford County Regional Arts Council and Sayre Theatre since 1995. This ongoing support has enabled the theatre to take a step beyond its rich history into a second century of new adventures, providing a timeless venue for first-run films, independent film festivals, children’s theatre, Nightlife on the Susquehanna live performances, fundraising for local charities, special community events, birthday parties, meetings, and more.

Almost twenty years ago, BCRAC created a modern, comfortable, and attractive arts center that continues to serve the needs of today’s movie and live performance patrons. A renovated lobby and concession area, an art gallery, two small cinemas, and a large theatre space, dedicated as the Guthrie Performing Arts Center, were the first of many ongoing upgrades to the facility. Through the generosity of a friend of the theatre, two retro-style chandeliers now grace the interior of the Performing Arts Center.

With the help of the Pennsylvania Council on the Arts, Pennsylvania Performing Artists on Tour, Major Sponsors, and the United Way, live events are presented in the Guthrie Performing Arts Center, ranging from the Nightlife on the Susquehanna series to the School Time Youth series and stand-alone events, such The U.S. Air Force Celtic Ensemble, Mansfield University’s Concert Choir, Pro Musica Singers, and others. Sayre Theatre also hosts The Missoula Children’s Theatre and the Annual Learning Early Network Conference.

Sayre Theatre has had a unique look about it since its marquee was removed in March of 2015 and a temporary one replaced it. The marquee committee worked feverishly with the Hunt Engineers to design, fund and replace the marquee and bring the Sayre Theatre back to its familiar, yet awesome, new look. Bartush Signs of Orwigsburg, Pennsylvania was hired to custom design and fabricate the front and two side panels of the marquee, replicating the appearance of the former marquee in 21st Century technology. Local businesses, including Nucor/Vulcraft of NY, Jeff Paul Plumbing and Heating, installed much of the structural and finish work beginning in the spring of 2016. The new marquee was completed in 2018, and is dedicated to the memory of Dr. Bruce Boselli, a beloved area physician and 25-year BCRAC board member.

The second floor of the theatre not only houses three Christie CP 2210 digital projectors, it also features a large open space with a small kitchen area that is used for meetings, artist workshops, birthday parties, and special Hollywood Café events.

A vibrant history and a bright future complement each other at the Sayre theatre. Whether you are coming out for the latest movie or a live event, we provide memories which stick with you.
We are situated at 205 S. Elmer Ave. Sayre, PA 18840
Manager: Jessica Saviano
Phone: (570) 882-9000
Email: sayre@bcrac.org
The Sayre Theatre is a historic venue of the Bradford County Regional Arts Council (BCRAC).
For more on BCRAC see here.